The last few days, I have been running to the podcast, “Dolly Parton’s America”. In Episode 1, “Sad Ass Songs”, the host Jad Abumrad, asks Dolly Parton if she considers herself a feminist. Before the question has exited his lips, she responds with a resolute,

Mary Magdalene and more importantly, Jesus, were feminists in practice.

Soon afterwards he (Jesus) went on through cities and villages, proclaiming and bringing the good news of the kingdom of God. The twelve were with him, as well as some women who had been cured of evil spirits and infirmities: Mary, called Magdalene, from whom seven demons had gone out, and Joanna, the wife of Herod’s steward Chuza, and Susanna, and many others, who provided for them out of their resources.— Luke 8:1–3

She is mentioned by name 12 times in the gospels. That is more than most of the apostles. In a book where only 5.5 to 8% of those named are women, she stands alone. Even more extraordinary, her story appears in all four of the Gospels.

Remarkably, she is not identified by her relationship to a man. She is not Mary, the daughter, wife or widow of . . . she is simply referred to as Mary, called Magdalene.

Throughout history she has been referred to as the “apostle to the apostles,” but I say to you she is Apostle, period.

Mary Magdalene traveled with Jesus.  She provided for Jesus. She ministered to Jesus. While others ran, she stayed at the cross and watched the man that saved her from herself die an agonizing death. She discovered the empty tomb. She was first to see the risen Lord and first to announce His rising.

The Bible tells us Mary Magdalene supported Jesus’ ministry. At a time when approximately 10% of benefactors were women,  we know she was a woman of independent means. The Bible also tells us she traveled with Jesus and the twelve. That is when the story goes sideways.

No. What it does is go all kinds of Jesus.

Mary Magdalene traveled with Jesus and the twelve along with other women. MM is listed first, most important. Traveling with men other than one’s husband was unheard of, calling the reputation of the woman and her companions into question.

See, women of that era weren’t allowed to worship whom they chose. They worshipped as their husband OR master saw fit. Religious co-education wasn’t even a concept. Other than Jesus, there is no record of a Jewish teacher of the time instructing women alongside men.

Yet, within a few scant generations, Jesus’ elevation of women vanished like the morning mist.

By 300, Mary Magdalene would be determined a prostitute by Pope Gregory. Most of humanity was illiterate. They depended on those they trusted, those they believed to be anointed, to speak truth of God’s word. Without any Biblical or historical support, Mary Magdalene was deemed a woman of disrepute and disgrace.

“She whom Luke calls the sinful woman, whom John calls Mary, we believe to be the Mary from whom seven devils were ejected according to Mark, and what did these seven devils signify, if not all the vices? . . . It is clear, brothers, that the woman previously used the unguent to perfume her flesh in forbidden acts . . .- Gregory’s 23rd homily

Because even in the church, the enemy reaches for the first arrow in his quiver.

Mary Magdalene’s mental illness or disorder, the demons Jesus released her from, reckoned to the vices. Her stature reduced to that of the prostitute and “the unguent to perfume her flesh in forbidden acts . . .”

The enemy doesn’t want us to recognize what Jesus exalted. 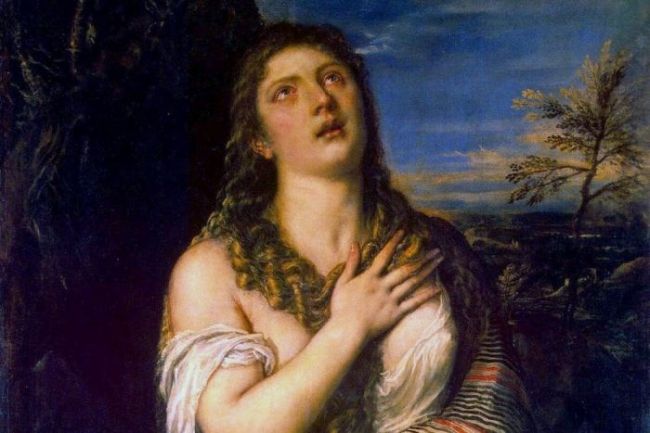 Mary Magdalene’s reputation was altered to suppress women’s leadership in the church even though the Gospels aligned.  She was the most prominent woman of her time and her importance could not be denied—but her character could be altered to something less threatening. The church portrayed women as Madonna or whore, not power and influence.

Gnostics describe her as Jesus’ lover or wife. Again, unsupported by the Bible and a dilution of Jesus’ message through action. The Gnostics infer that men and women are incapable of a successful working and ministerial relationship outside of a more intimate relationship.

It does not portray the power of men and women when they live in Jesus.

We are in the midst of this very battle today-women in the church. We need only look at the recent treatment of Beth Moore to realize we are not far removed from Tertullian or Pope Gregory. Two thousand years ago Jesus did what we are still not willing to do.

And think about this: In most of the world, violent attacks against women are still blamed on the women.

Yet, two thousand years ago Jesus said if you looked on a woman with lust, you had already committed adultery. He put the responsibility squarely where it belonged. But, we water down even this radical message to if you think it, you’ve done it, when it is sooo much more.

We have a habit of picking and choosing what we find Biblically palatable. Jesus created a working standard for His church and women’s place in it thousands of years ago. How many more years before we actually implement it?

I dig Jesus, yoga and dirt. In that order. View all posts by Mia Neuenhoff